“The process of community development can be seen as the ultimate act of public creativity.”

Just Act activates a local community’s assets and hopes by working with diverse groups, creatively facilitating collaboration and communication among them to collectively generate transformative strategies for civic change. The result is resident-driven development of public spaces that promote people’s health, human gifts, and well-being. 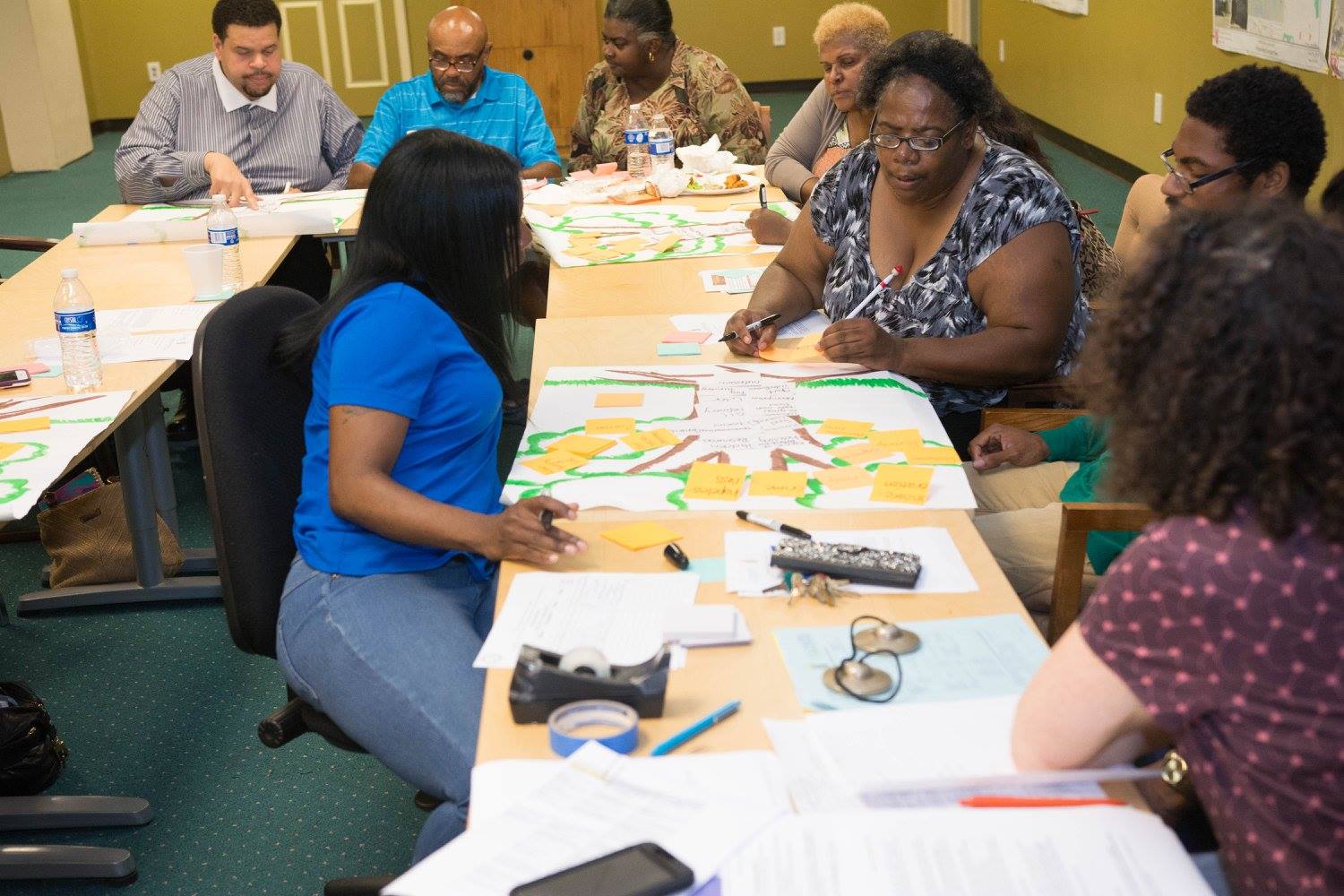 Just Act’s commitment to social justice honors the importance of identifying all forms of social oppression (personal, systemic and societal). We recognize that experiences of prejudice and discrimination are a social reality. Whether covert or overt, intentional or unintentional, these experiences create real barriers that may limit access and opportunities in local communities, as well as prevent the active participation of every community member.

This process is guided by our expertise in story circles, story harvesting & analysis, Theatre of the Oppressed, and Just Act’s unique performance “gift-back” technique highlighting residents’ ideas, emotions and voices.

Email us today if you’d like to collaborate with us! info@justact.org 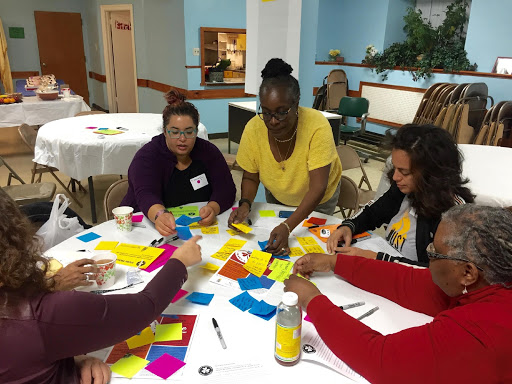 This is Germantown Heart & Soul 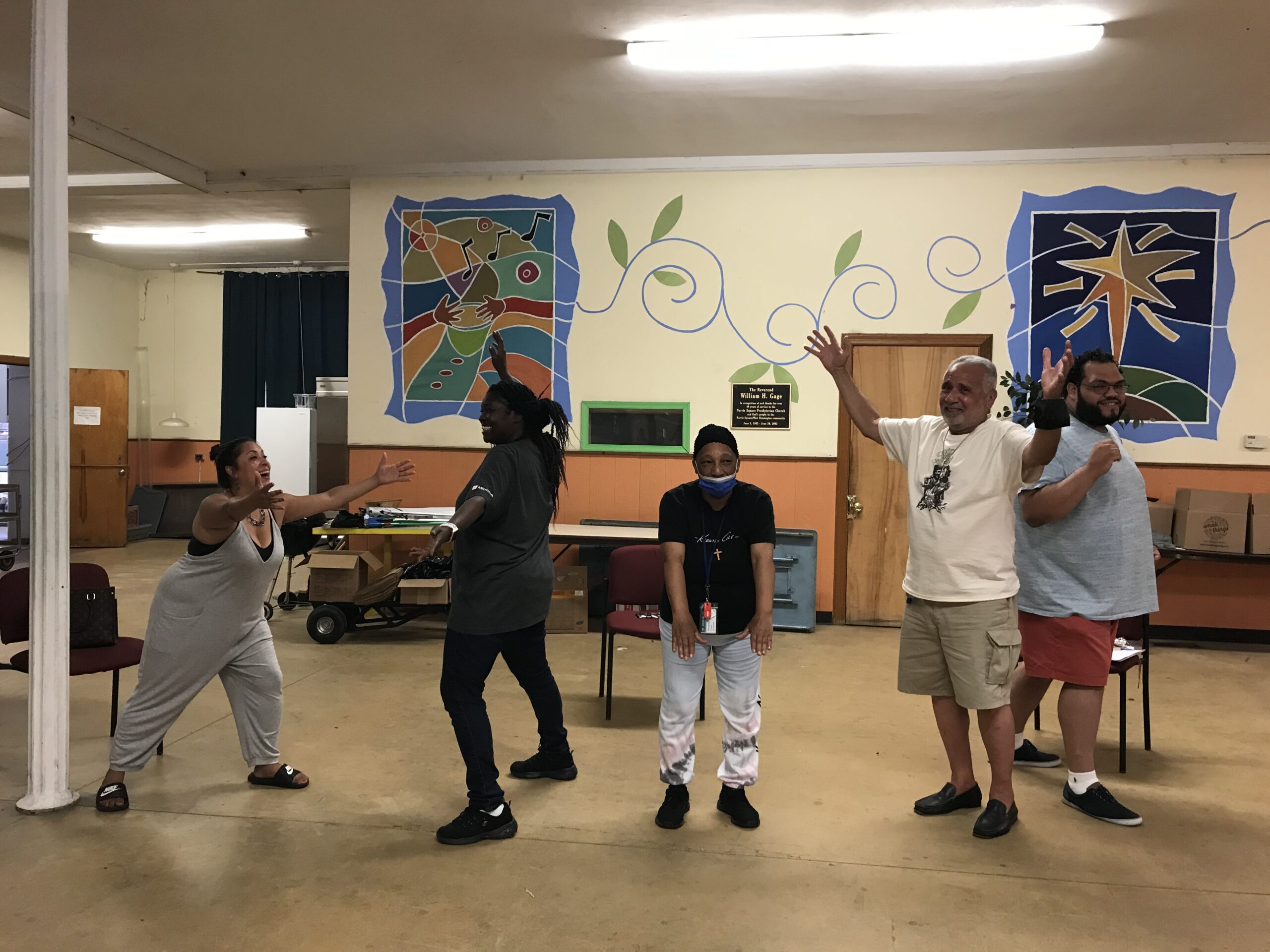 Our theatre, arts and community-based cultural organizing model is situated in the national field of arts organizations committed to creative community-led place-keeping as form of urban restoration, both physical and psychic. With decades of professional and community-based theatre experience, Just Act purposefully directs our multi-dimensional expertise  into being a catalyst for, and animator of cross-sector groups to activate their own creativity for making change.

Collaborations start with conversations with our partners, then we strategically design supportive, motivational gatherings for brave and meaningful public conversations to overcome social and civic fragmentation, shifting ways of interacting and thinking about renewing personal and community vitality, development as well as activism.

Our model is anchored by community members who we train to facilitate a creative, public process for bridge-building between the way residents emotionally experience where they live, and how developers and city stakeholders reflect on a neighborhood’s status.

Just Act’s engagement process is an art product unto itself. Rooted in residents’ own stories, our model supports neighbors to shift the narratives about who they are and where they live, and bring forward their truths as vital to community development. It is a creative, public process for bridge-building between the way residents emotionally experience where they live, and how developers and city stakeholders reflect on a neighborhood’s status.

Putting the human heart into an equity-centered toolkit for planning and place keeping.

what is resident-driven cultural organizing:

Just Act fosters an art-powered process of Story Circles and theatrical “Gift-backs” to center residents’ emotional experiences with their physical environment in decision-making spaces alongside developers and city stakeholders. This process elevates community voices, empowering residents to shape engagement strategies from ideation to actualization. Utilizing anti-oppressive facilitation methods, Story Circles invite participants to radically reimagine systems and possibilities for a more connected, supported neighborhood through intergenerational programming. Resident-driven cultural organizing leverages the existing artistic and creative assets of local residents and their cultures and integrates these resources into activism to co-create ideas for community building that everyone can champion.

We catalyze resident-led, community conversation and radical imagination that transforms personal and collective thinking about what real change entails, and support development of action items to reach it. 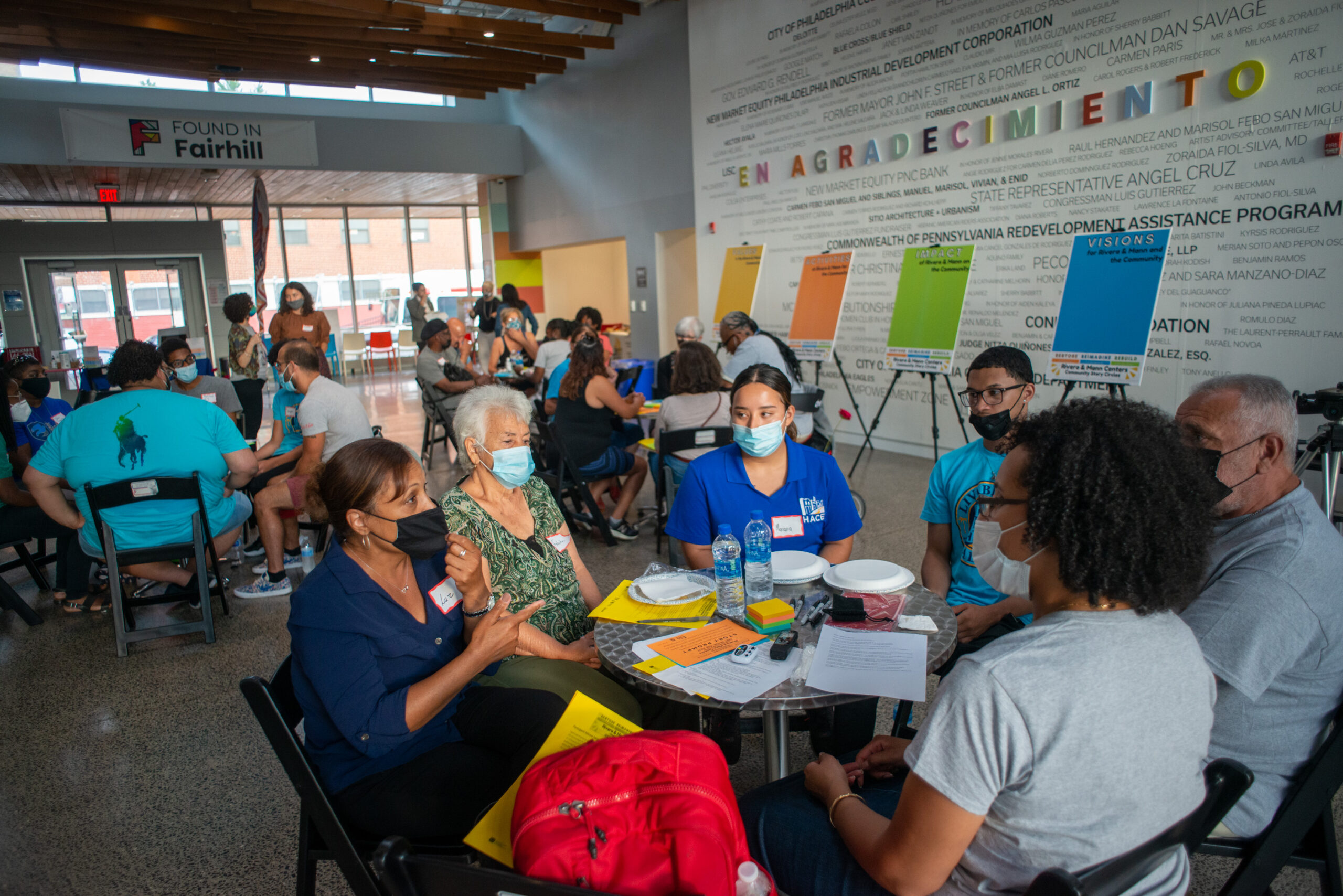 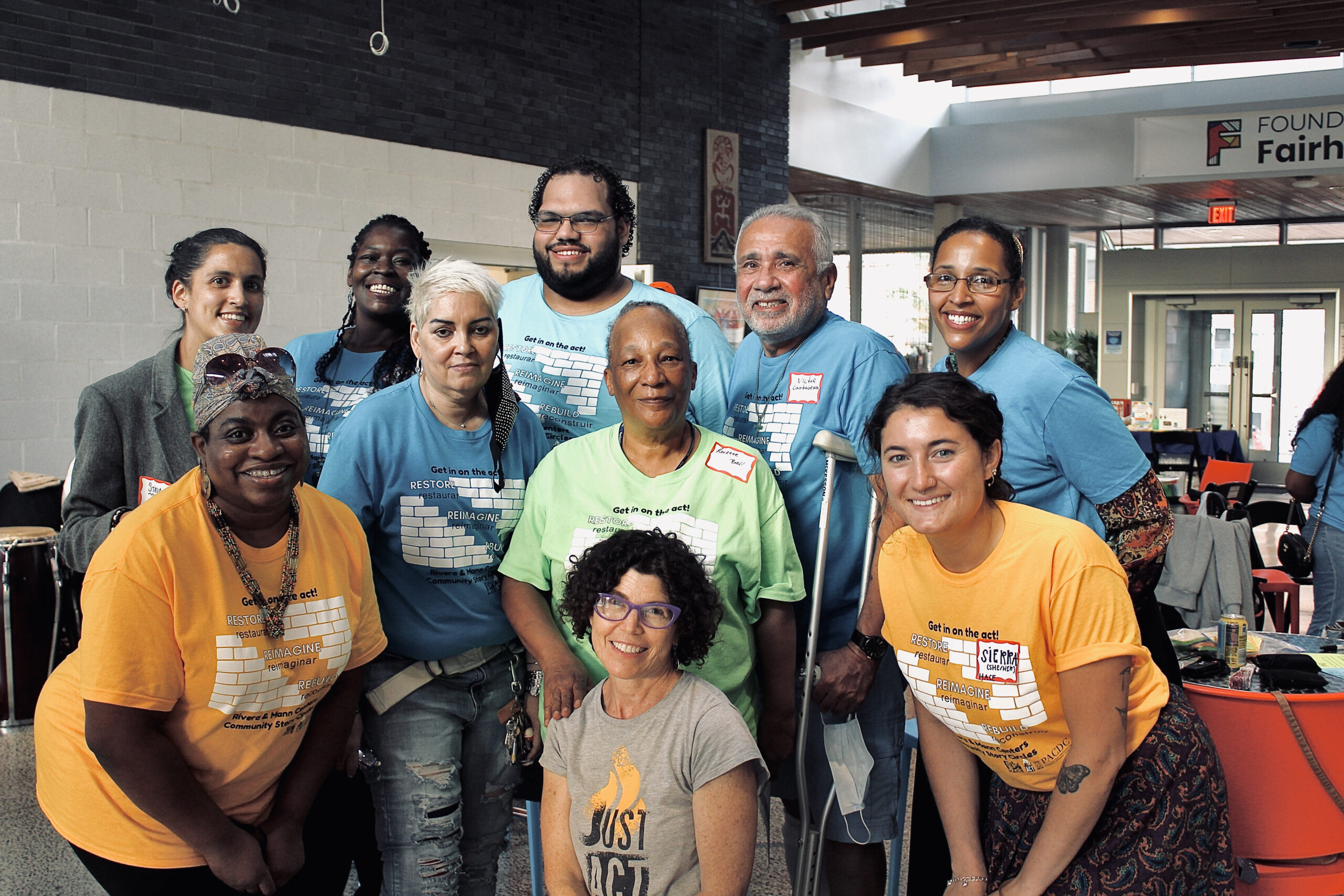 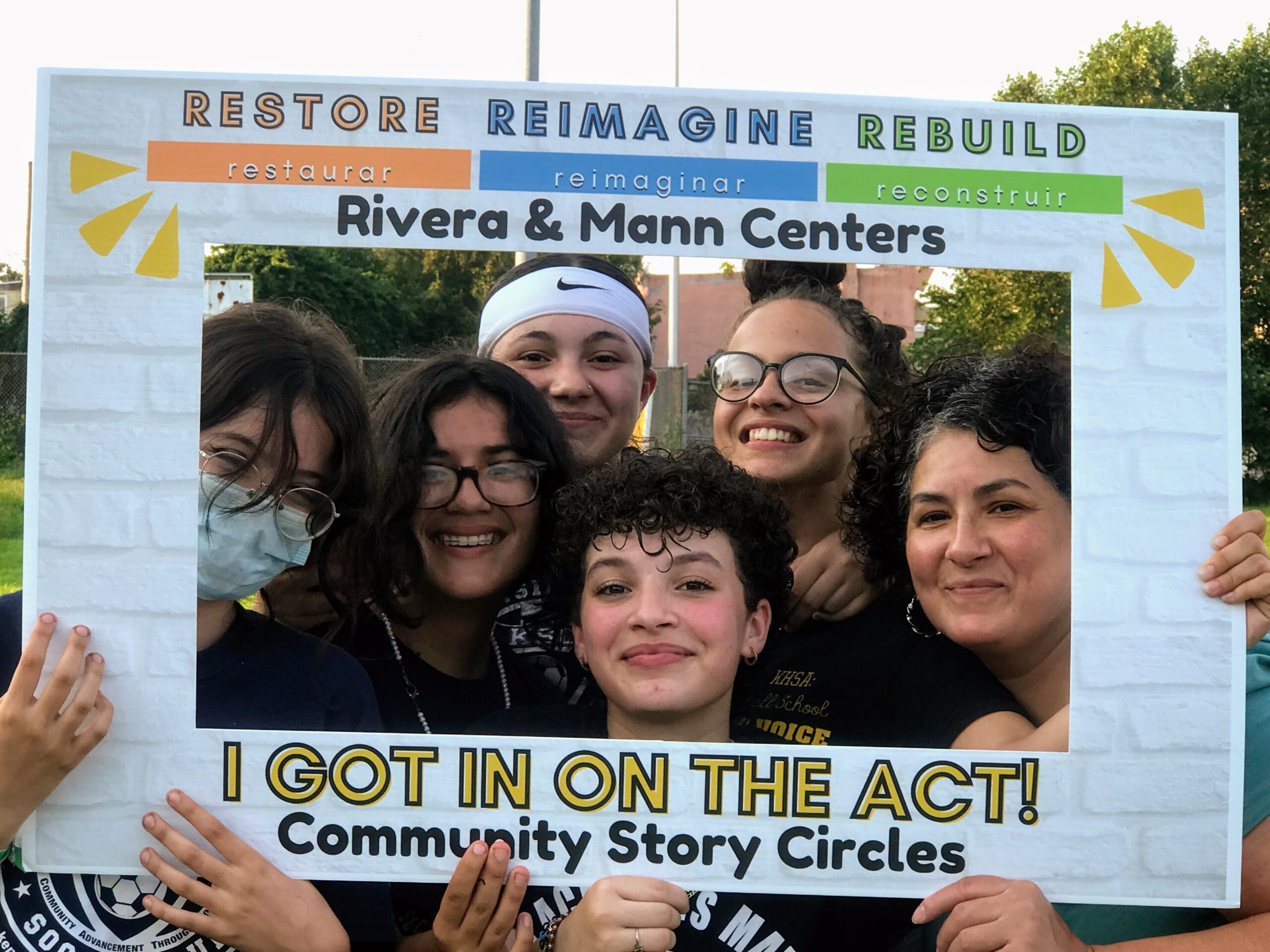 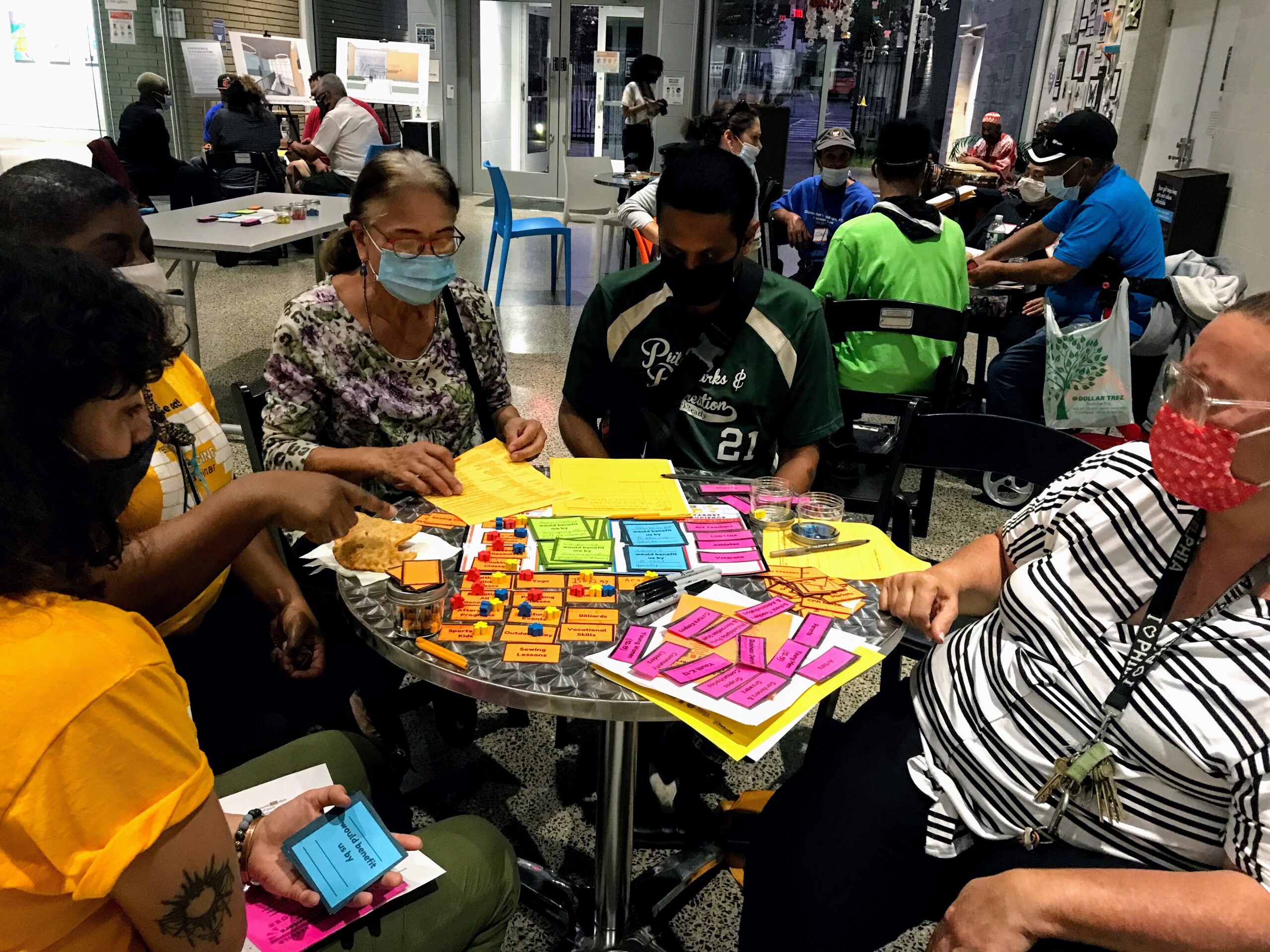 Restore-Reimagine-Rebuild Rivera  & Mann is an innovative, resident-led, community-based engagement project of Just Act in partnership with HACE CDC, paralleling the City of Philadelphia’s Rebuild initiative that is renovating the Rivera & Mann Centers in Eastern North Philly.

PROLOGUE: Recruitment, development and activation of a Community Action Team–aka The CAT– comprised of residents, local artists, HACE CDC and Parks & Rec staff, to plan the project; designed and facilitated by Just Act.

An intergenerational, bilingual Story Engagement Team of residents–aka the SET– were trained by Just Act to facilitate a Story Circle Process along with story harvesting, concluding each event with performance “gift-backs” of residents’ stories and experiences.

Naida Elena Montes, the Story Engagement Team Coordinator, and resident of the neighborhood where the project takes place, shared that “This initiative is important in multiple ways as it gave us community members (the SET team) an opportunity to be a part of empowering residents to participate in the community planning process using the art of story sharing and theater to elevate resident voices while simultaneously fostering deeply engaged listening among peers and the honoring of stories in the process of data harvesting.”

Just Act created a Board Game for residents to review, edit and organize data harvested from the Act One Story Circles, and to begin  to collectively identify what should go into a culturally and community-responsive program blueprint for a thriving Rivera and Mann Centers at 5th and Allegheny.

“The game was a creative and interactive experience that enabled the members of the community to look at the strengths already within Rivera Mann as well as share a vision of what the centers could be. It also allowed the community to make sure our voice is being heard through building the blueprint that will hopefully be the new Rivera Mann.”–Jose Vinales, SET Member and community resident 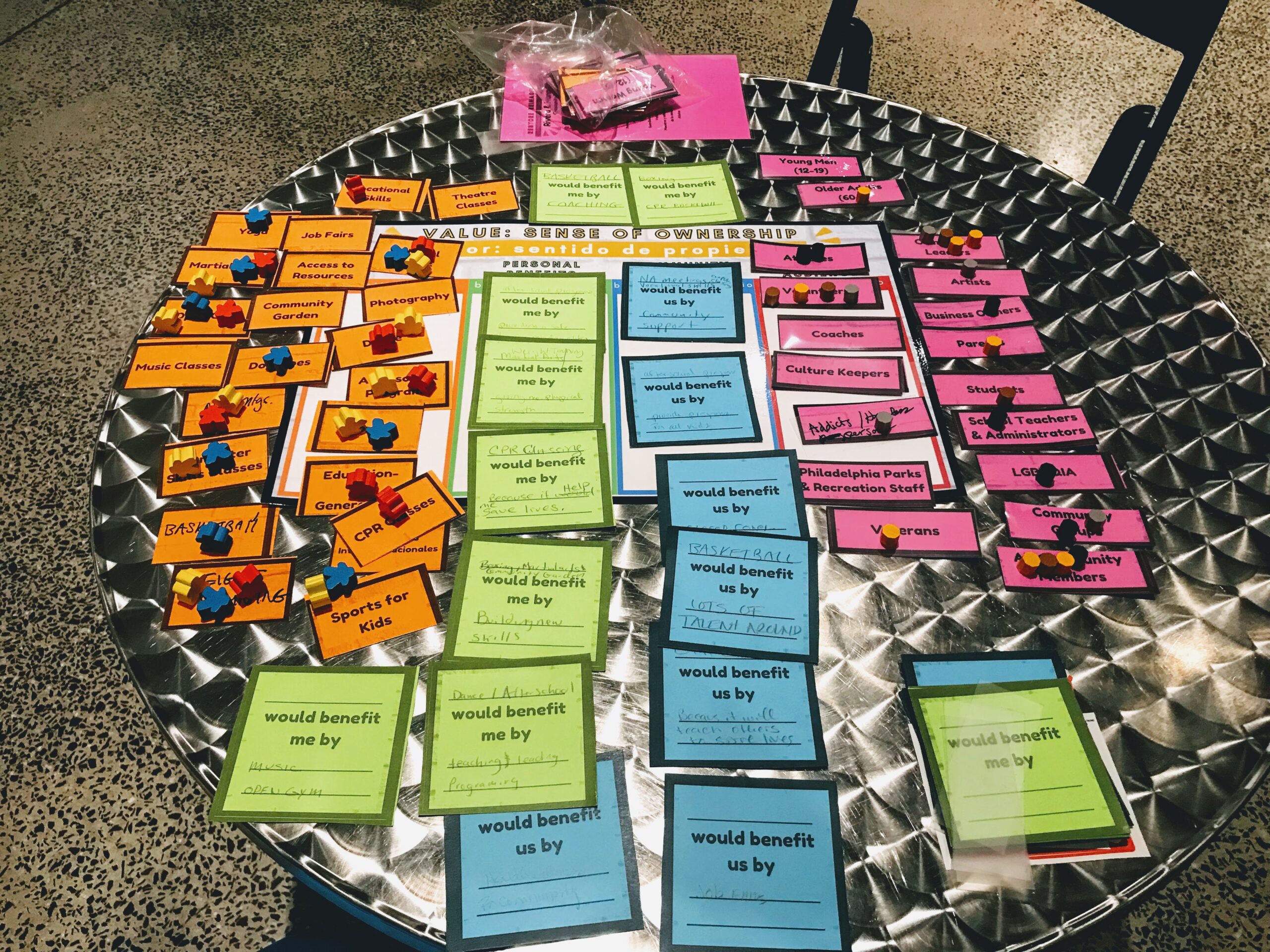 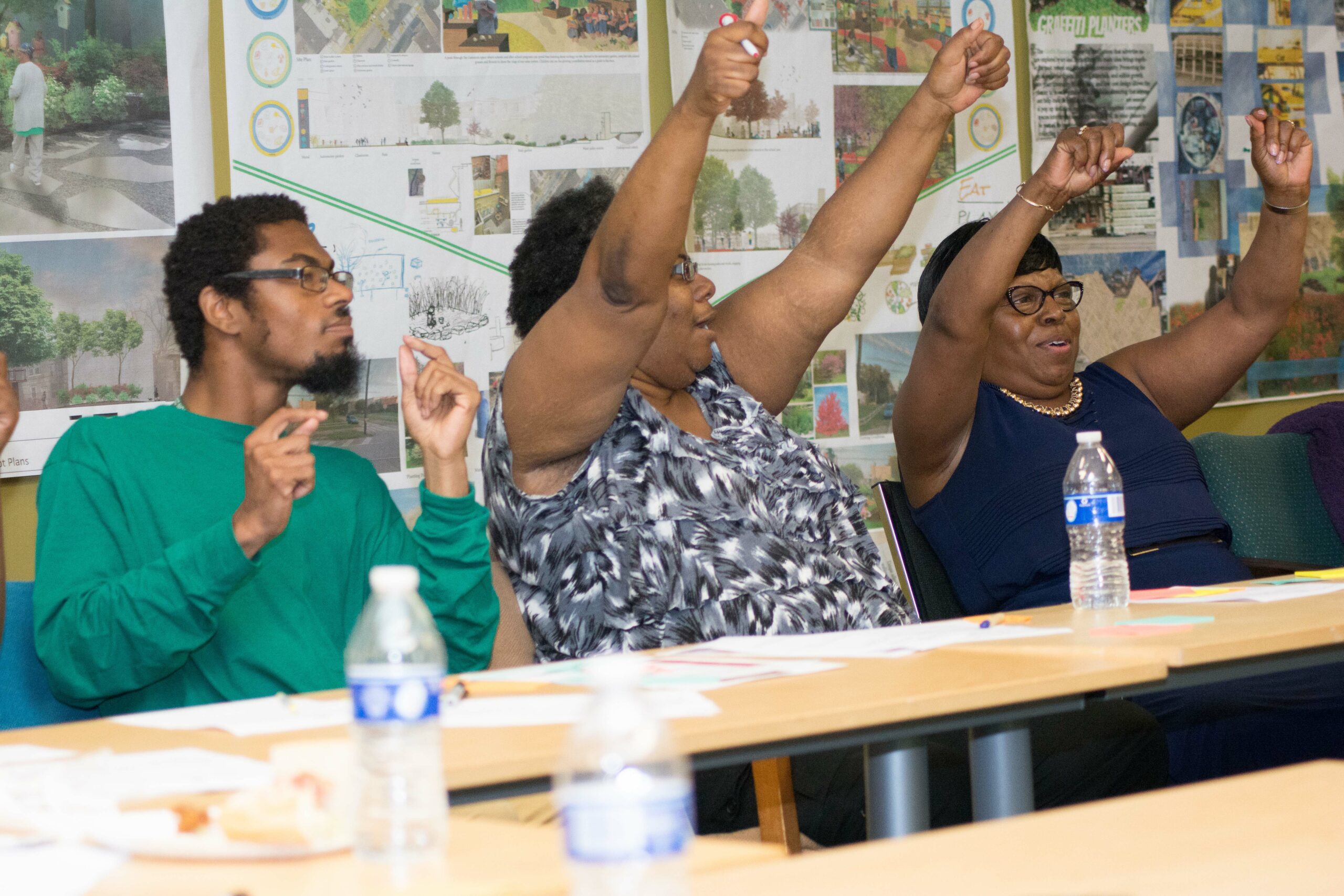 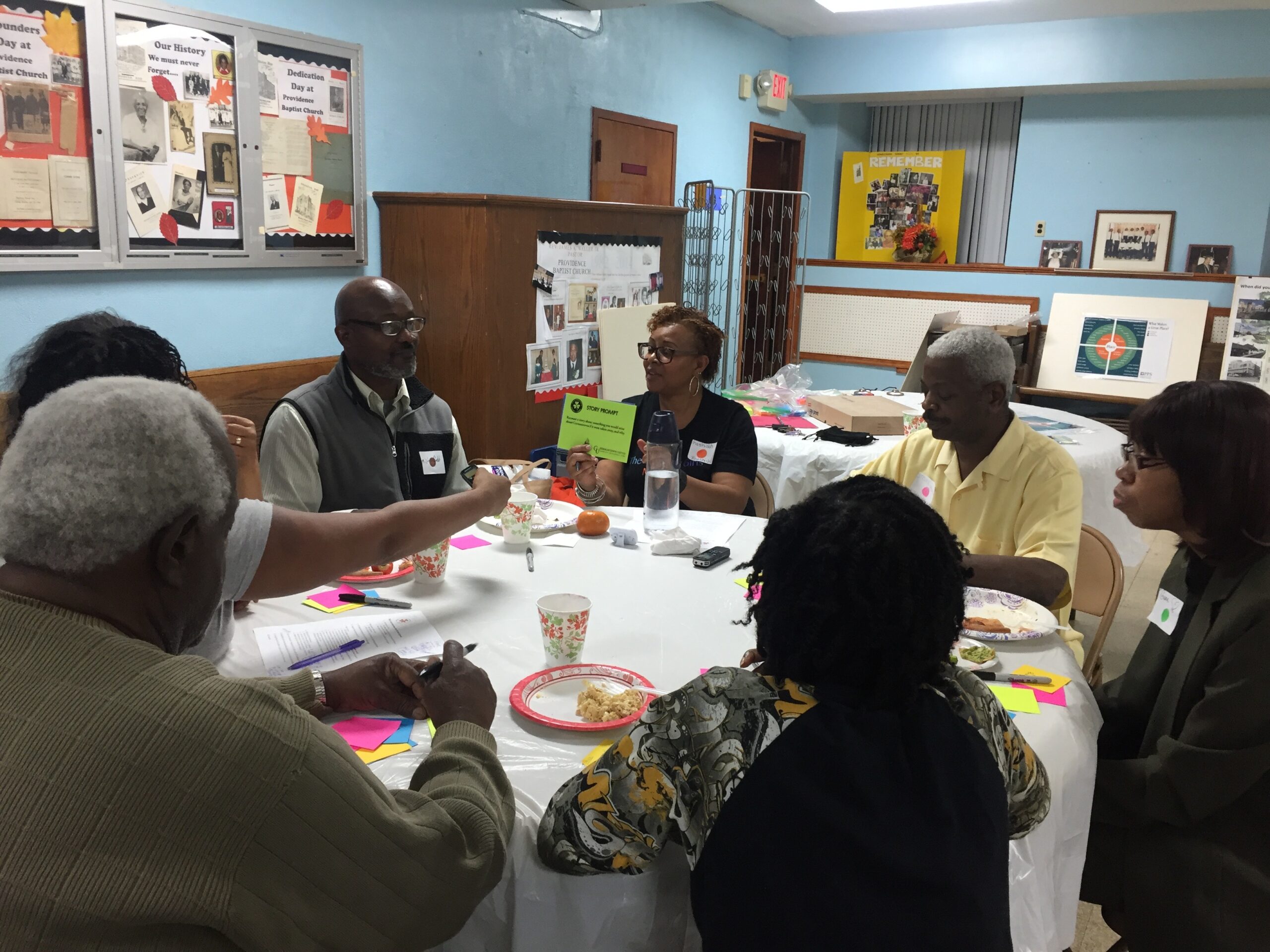 Just Act pioneered our model for resident-driven planning when we first developed the idea of having a Story Engagement Team (SET) comprised of residents trained by us to not only facilitate the Story Circle Process along with data harvesting, but to also learn to perform theatrical “gift-backs” of tellers’ stories. Just Act was the lead artist for The Pennsylvania Humanities Council project called ChesterMade. The ChesterMade SET led story circle events throughout the city of Chester, and then devised and performed a “Data Play” at Chester City Council to advocate for support of an historic arts & culture district in their city. 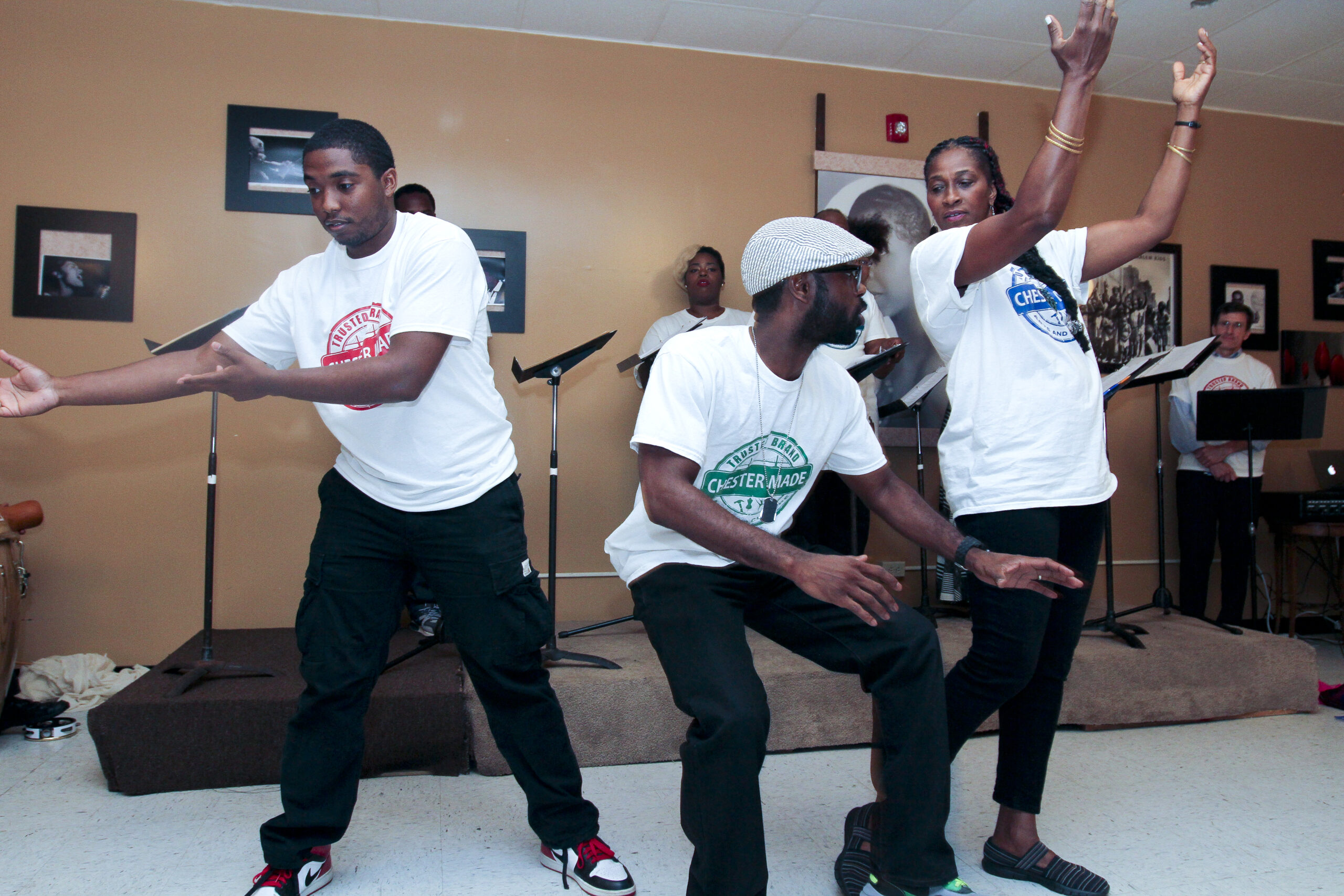 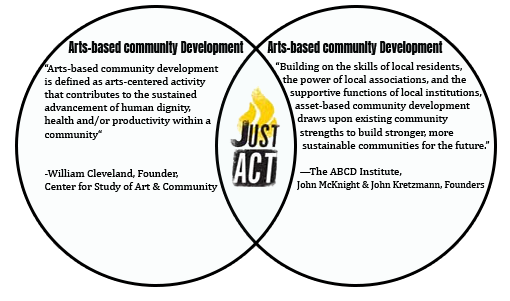 Network Mapping
Community Development
We work collaboratively with and for your community for any planning process to create equity.
Corridor Planning
Corridor planning can invigorate neighborhoods and communities when community members share in strategy. Using Theatre Arts based techniques we get to the core of what a community really needs AND wants. 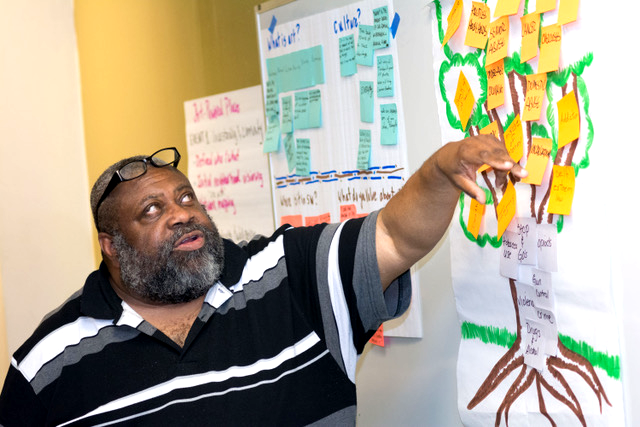 TAKE ACTION, ENGAGE with us!

“The space we’ve created in the Art Powered Places process with Just Act has allowed people to reveal their earnest observations of the neighborhood and its people and has given us more deeply relevant knowledge of the challenges we face as we work to grow wellness in our communities. ”

Just Act's Forum Theatre Training is geared towards individuals seeking facilitation skills and training in Forum Theatre--including devising techniques- to improve their ability to effectively engage justice, equity, diversity & inclusion issues, and using interactive theatre as a tool for social change, interpersonal and community repair, from activist and organizers to educators, social workers and facilitators of all kinds.

$520 SPECIAL DISCOUNT if you want to take both Joker Trainings

What is Just Act Go Vote 2.0?
It is a  non-partisan voter education campaign using interactive Forum Theatre to raise awareness about why many people don’t vote, create space to practice new strategies for engaging in difficult conflicts with people who don’t consider voting as vital to keeping democracy alive. AND, we will register new voters and help them make a plan for voting.

Voting is an urgent civic and personal issue. Choosing to vote or not vote is more than just a personal preference. For residents who aren’t deeply involved in community activism, how our government functions and why voting matters are abstract, complex concepts. Knowledge from high school civics classes, if one even had them, are but a vague notion from the past.

The result is that the impact of not voting and the decimation of citizen power doesn’t consciously register in our minds.

Traditional ‘Get out the Vote’ campaigns are all about facts, figures and reaching as many people as possible through door knocking, flyering (real and virtual), and phone/text banking. Such approaches do little to amplify residents’ experiences with disenfranchisement by the system of voting, and how the government—local or national—is impacting their lives.

What will Just Act, Go Vote do:

Just Act, Go Vote 2.0 will be a second iteration of the original Forum Theatre tour that Just Act created in the fall of 2018 to grow voter awareness amongst young people and register new voters.

We have witnessed how Just Act, Go Vote grows the number of people who feel compelled to vote because they now understand their relationship to voting.

While voting and candidate information might be publically shared, the data and analysis around voting is not effective in propelling people to the polls.

By increasing knowledge and understanding of how government systems work,  we can increase citizen participation in voting and inspire collective demand for racial, economic, and political equity.

What is Forum Theatre?

Forum Theatre is a structured interactive theatrical improvisation based directly on a group’s own stories of conflict. Audience members are called “Spect-Actors” and are given the responsibility of acting on injustices that they see in the characters’ relationships. To do so, they are invited to jump into the improvisation, and try out different strategies to productively tackle the conflicts in play. Forum Theatre enables participants to theatrically reflect on their social position and debate concrete actions that each person can take outside of the performance itself when they find themselves in similar conflicts.. In doing so, the Forum offers a rehearsal for reality, renewing and deepening our capacity to stand up more effectively for justice on personal and inter-group levels.

“My commitment to supporting local businesses was deepened as I envisioned, with neighbors, the potential of the business district and what we would want to see on Germantown Avenue.”

“This is Germantown Heart & Soul put a human side to commercial and community development. It was engaging and made it personal and meaningful to me because part of it was about me, about us!”

Your contribution is valued